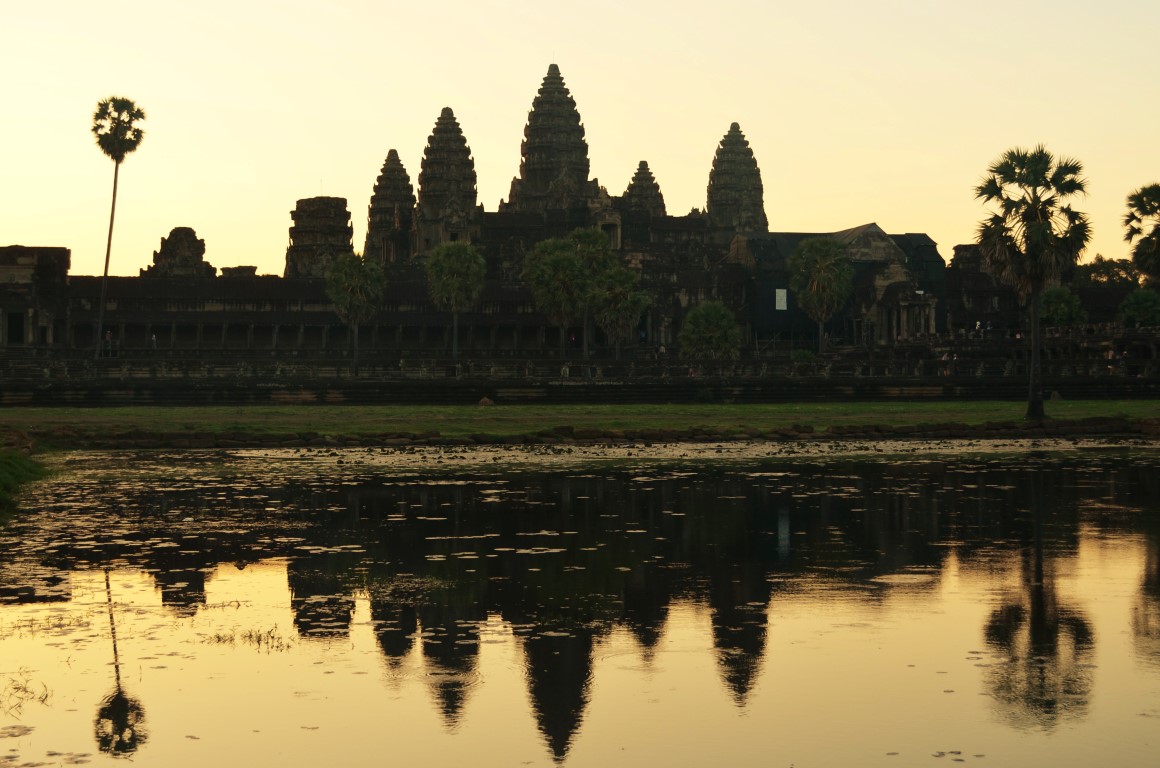 We wrote about the magnificent night-life in Siem Reap in our last post. But we all come to Siem Reap for a reason. And that is to marvel at the ancient temples that were built at the height of the Khmer Empire sprawling all over the Angkor Complex and beyond. The spiritual history of the Khmer Empire is somewhat confused. Mahayana Buddhism which originated in 1st Century BCE spread to several South Asian countries including Cambodia. Centuries later Hinduism became the mainstay of Cambodia and reached its peak during the reign of King Suryavarman II who was heavily influenced by it during his travels to India. He erected the Angkor Wat in early 12th century as a tribute to Vishnu who is considered to be the omnipotent god of Hinduism. At the end of the 12th century Buddhism had made a comeback during the rule of King Jayavarman VII who built the city of Angkor Thom (The Great City). Today, you can see several temples which have a mix of Hindu and Buddhist influences.

While there are literally hundreds of temples in and around the Angkor complex, you need a plan to make the most effective use of your time. Though several temples are in ruins (and still littered with historic tales!), there are many which are quite beautifully restored. Here is our pick of the temples to visit while you are in Siem Reap (in the order in which we visited them):

This needs no introduction. It is the most visited temple in Siem Reap and rightly so. Angkor Wat was the centre of Khmer Empire from the 9th to 15th century. Angkor Wat was constructed during the early 12th century as a temple for Vishnu and the state capital during the reign of King Suryavarman II. The temple is spread over 200 hectares and built over three levels. A similar construction is found across many of the other temples in the Angkor Complex, resembling the sacred and mythical Mount Meru (considered to be the centre of physical, metaphysical and spiritual universes in Hinduism). Angkor Wat at dawn is a beautiful sight. The five domes represent the five peaks of Mount Meru.

As you enter Angkor Wat, the first level has magnificent bas-reliefs depicting stories from Hindu mythology. There are episodes from Ramayana and Mahabharata engraved along the two long hall-ways. 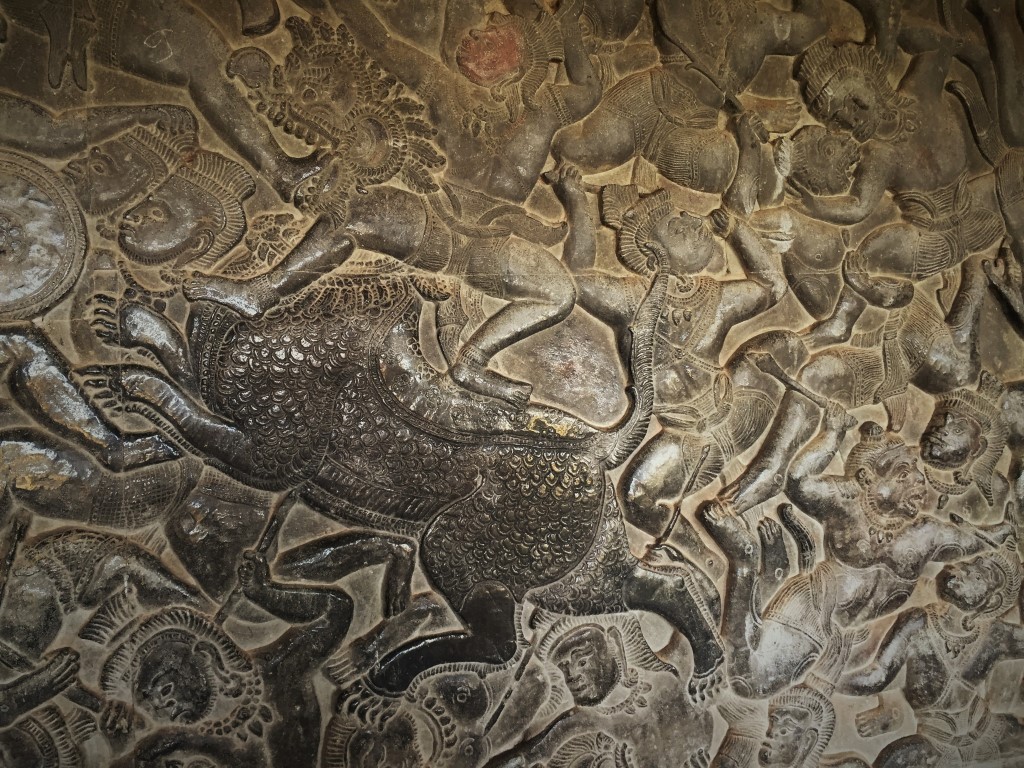 While walking around Angkor Wat you can see the monks worshipping and at times there are ceremonies being performed which fill the air with chants and positive vibration. 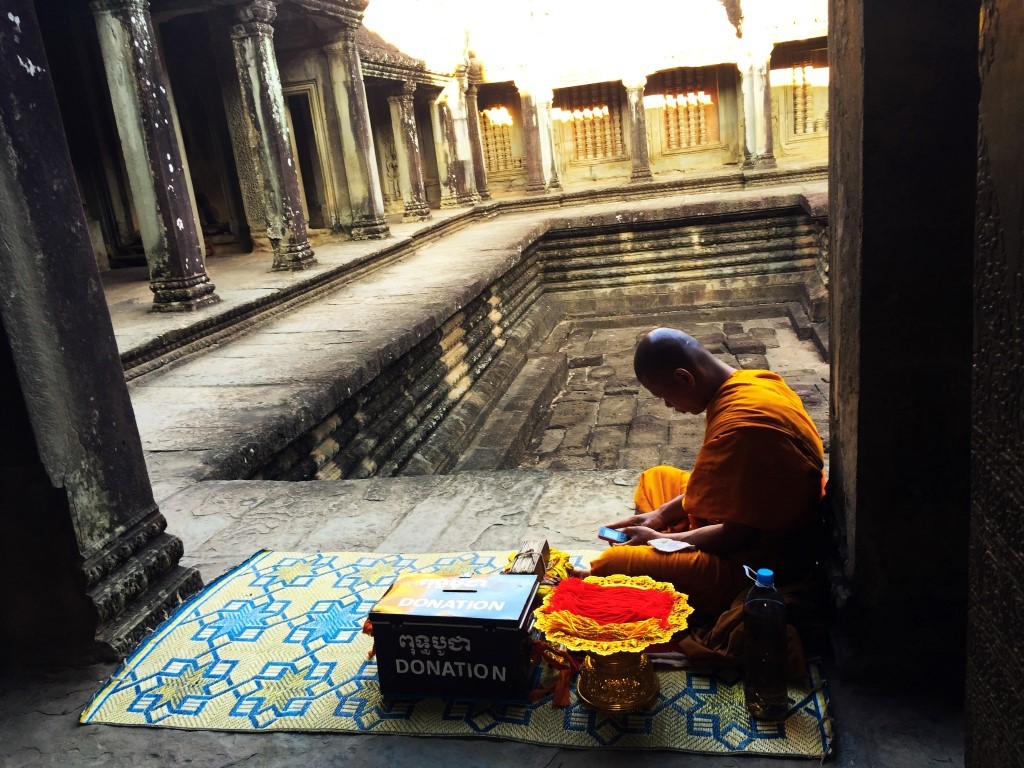 A monk at Angkor Wat, keeping up with the times.

Several statues of Narayana (an avatar of the Hindu god Vishnu) are seen in the halls of Angkor Wat. Some are still adorned and worshipped while others were broken during the several religious flip-flops in the history of Cambodia. 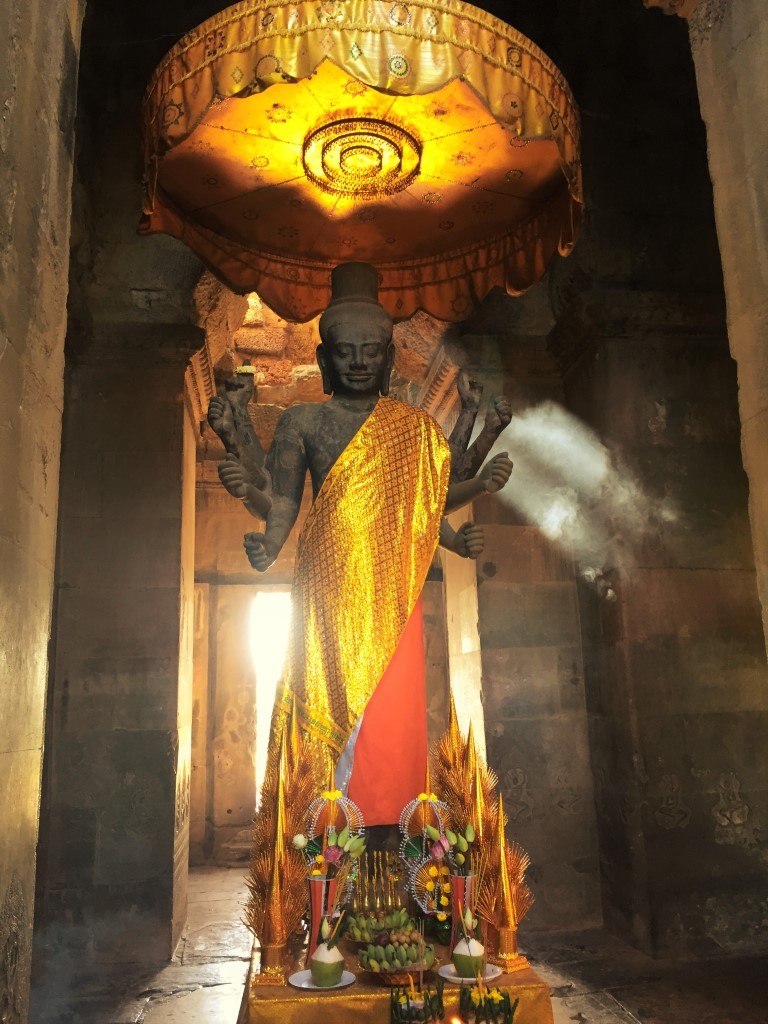 Narayana – an avatar of Vishnu

As you reach the third level you find the central tower called Bakan which has a steep staircase that represents the difficulty in ascending Mount Meru. A limited number of tourists are allowed per day in this section. 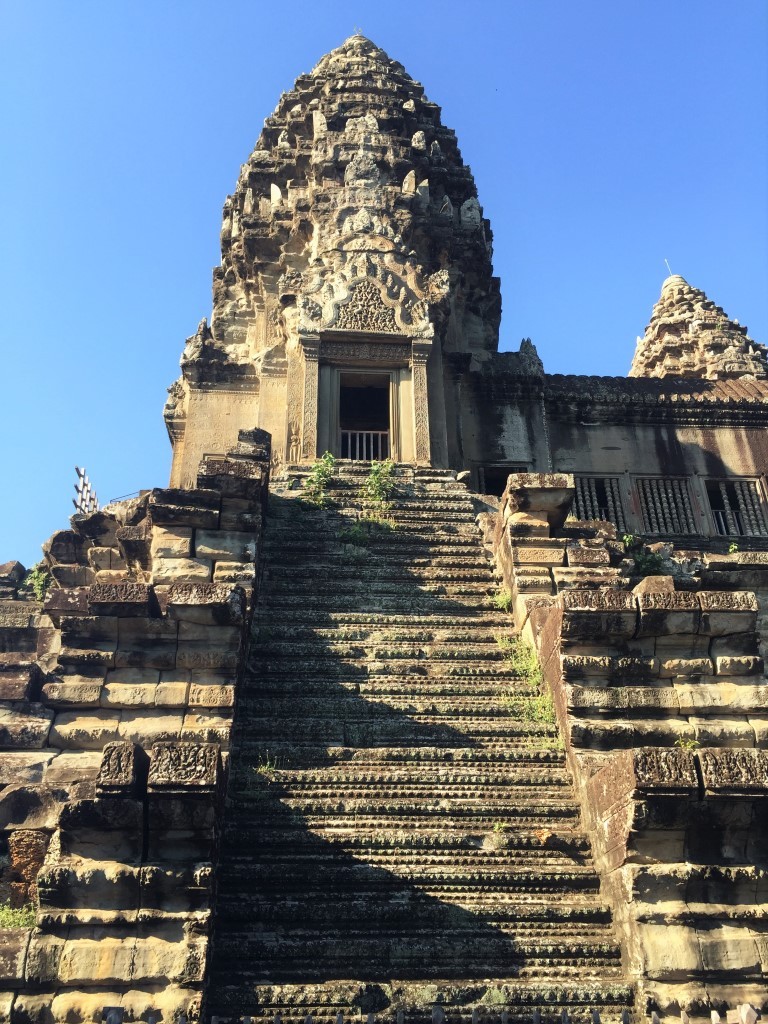 Angkor Thom which literally translates into Great City was the new state capital and city after the fall of Suryavarman II. At its height, the city accommodated one million people and was one of the largest cities in the world. It was constructed by King Jayavarman VII as his seat of power after he consolidated the Khmer empire and was its last capital. The entrance to the city from the south gate is lined with Devas (gods) on one side and Asuras (demons) on the other side depicting Sagarmanthan or Churning of the Great Ocean to produce the nectar of immortal life. 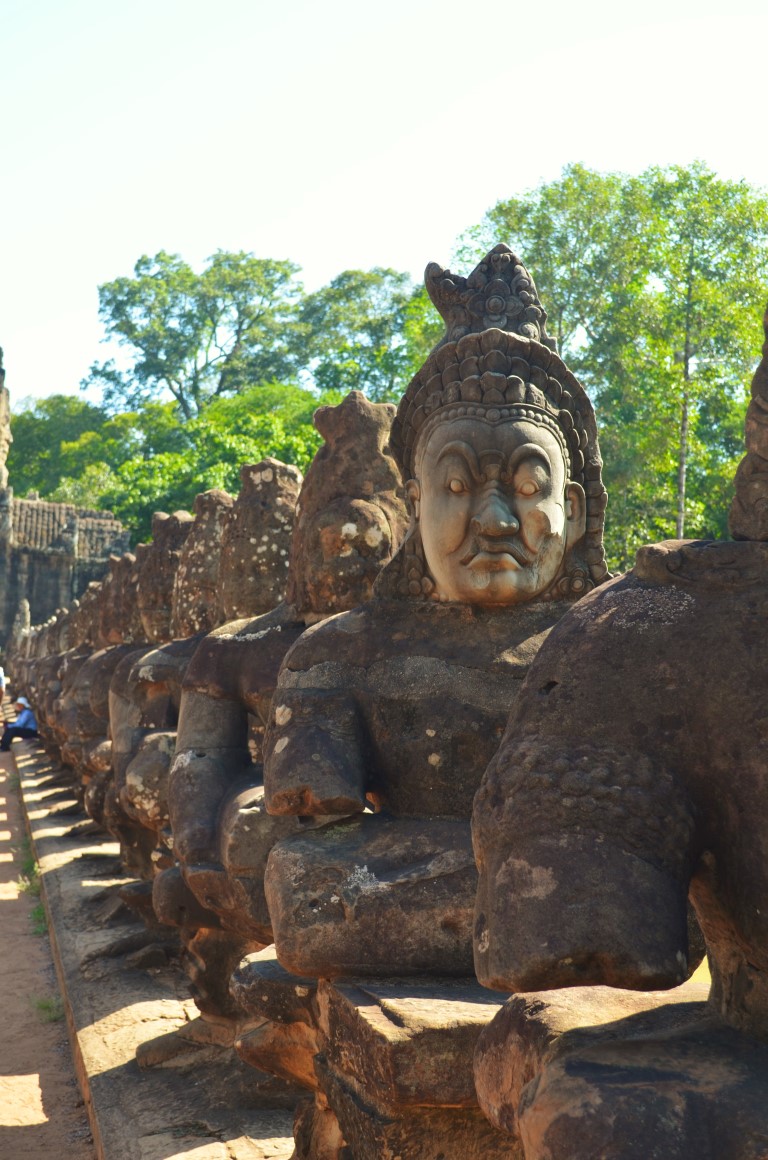 Bayon has 216 stone faces of Buddha constructed such that they look in all directions as if watching over the Khmer empire. It was constructed in the late 12th century as the official state capital of the Mahayana Buddhist King Jayavarman VII. 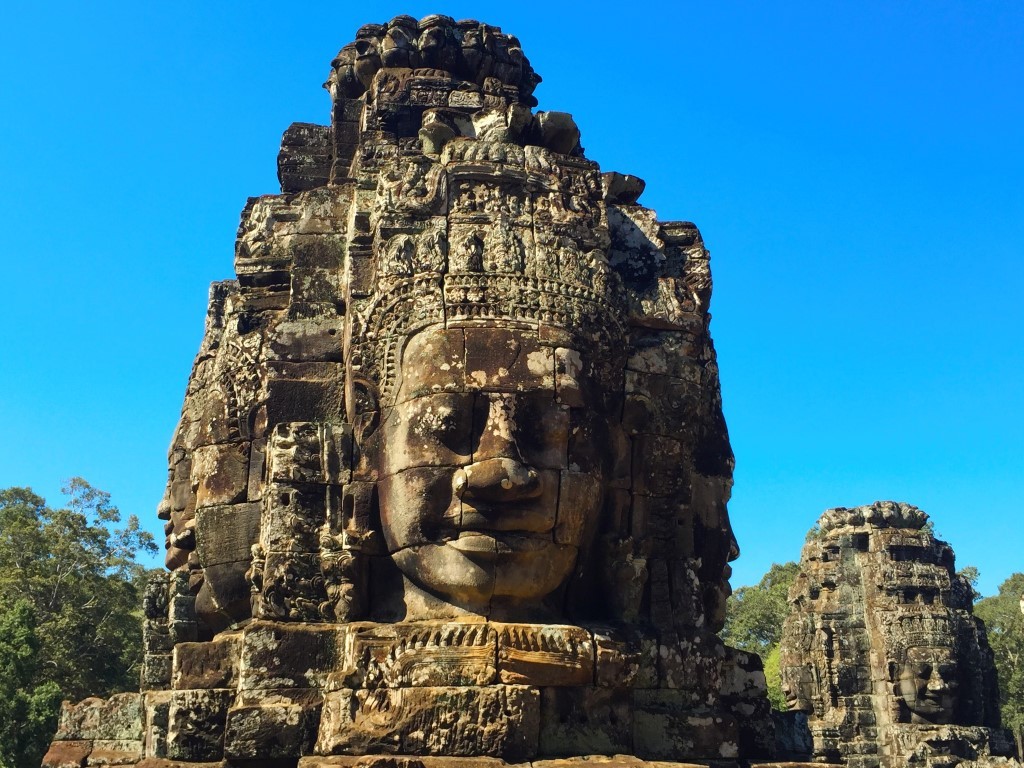 Ta Sohm was the temple built by King Jayavarman VII as a dedication to his father. A section of the temple is now reclaimed by a large fig tree. 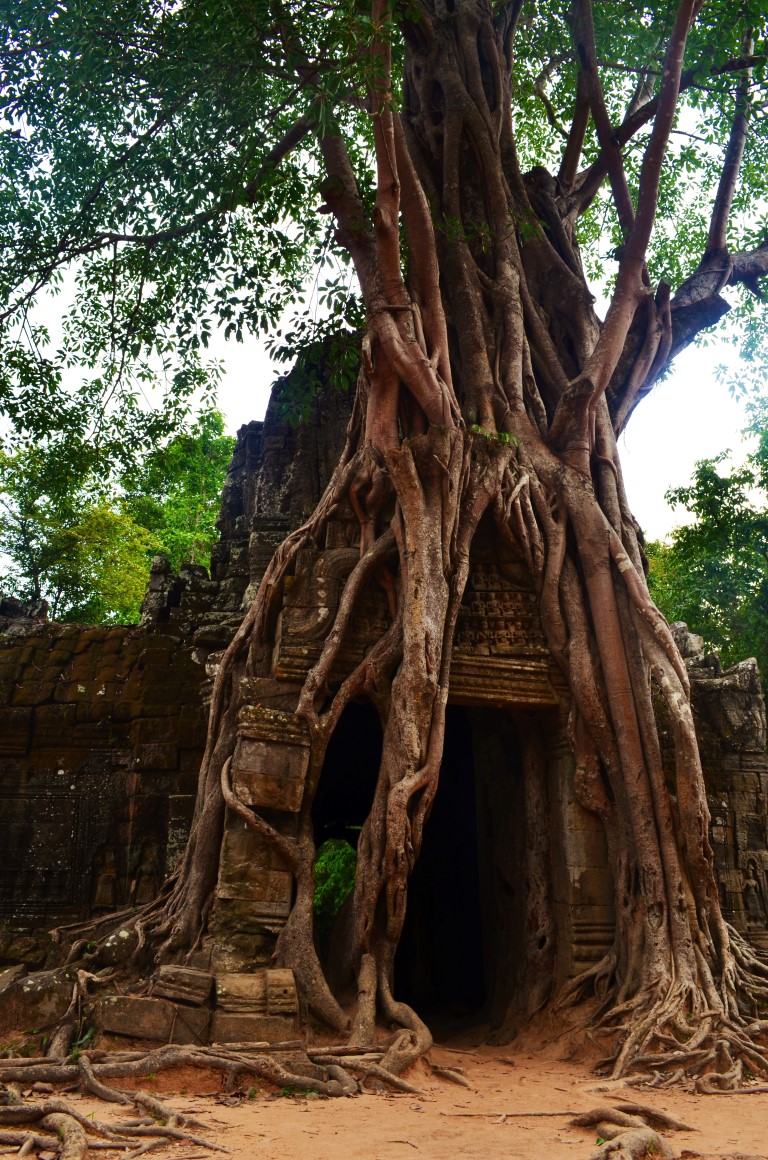 Nature claiming back its territory at Ta Sohm!

Preah Khan was also built by King Jayavarman VII to honour his father. This temple was partially consumed by nature! 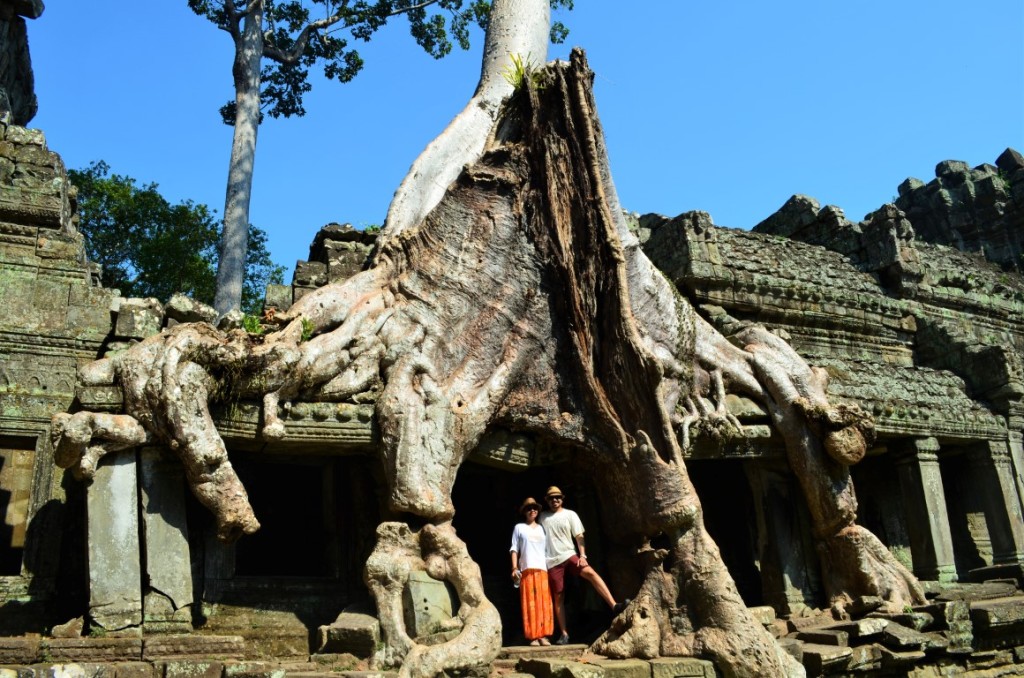 Banteay Srei is located 25 km north east of the Angkor Complex and it literally means Citadel of Women. It is so named because of the intricate carvings which are said to have been created by women artisans. The red coloured sandstones give it a different colour and hence is quite different when compared to the rest of the Khmer temples. 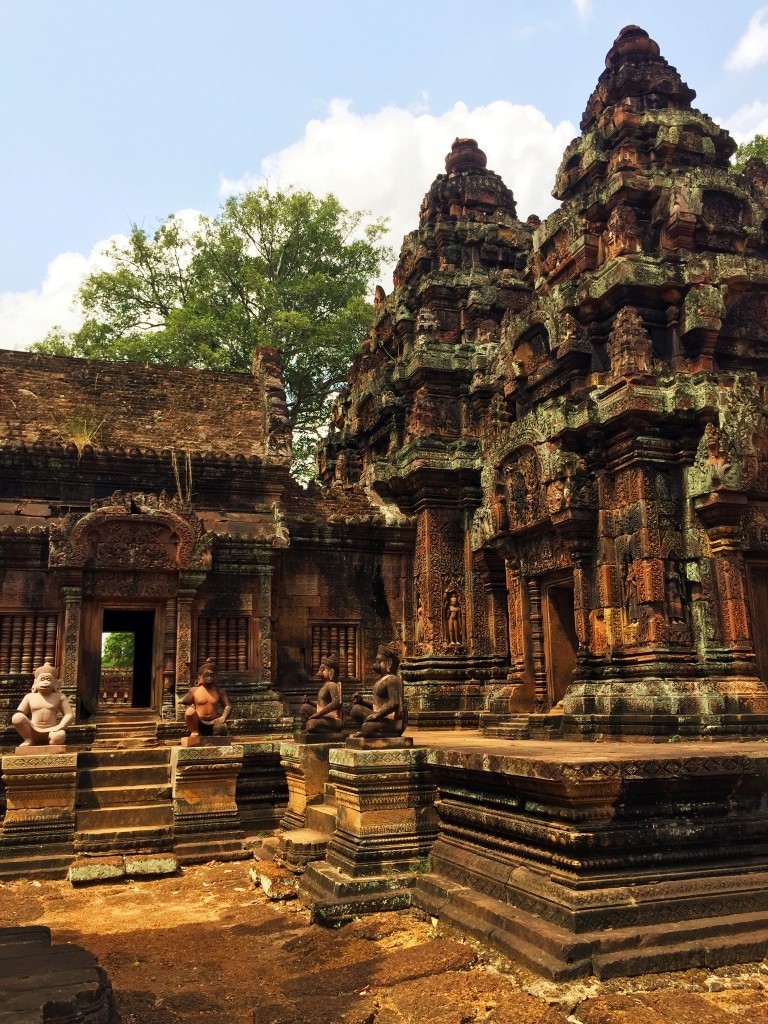 Next ArticleFor the love of Falafel (Part 2): Pita Bread GF