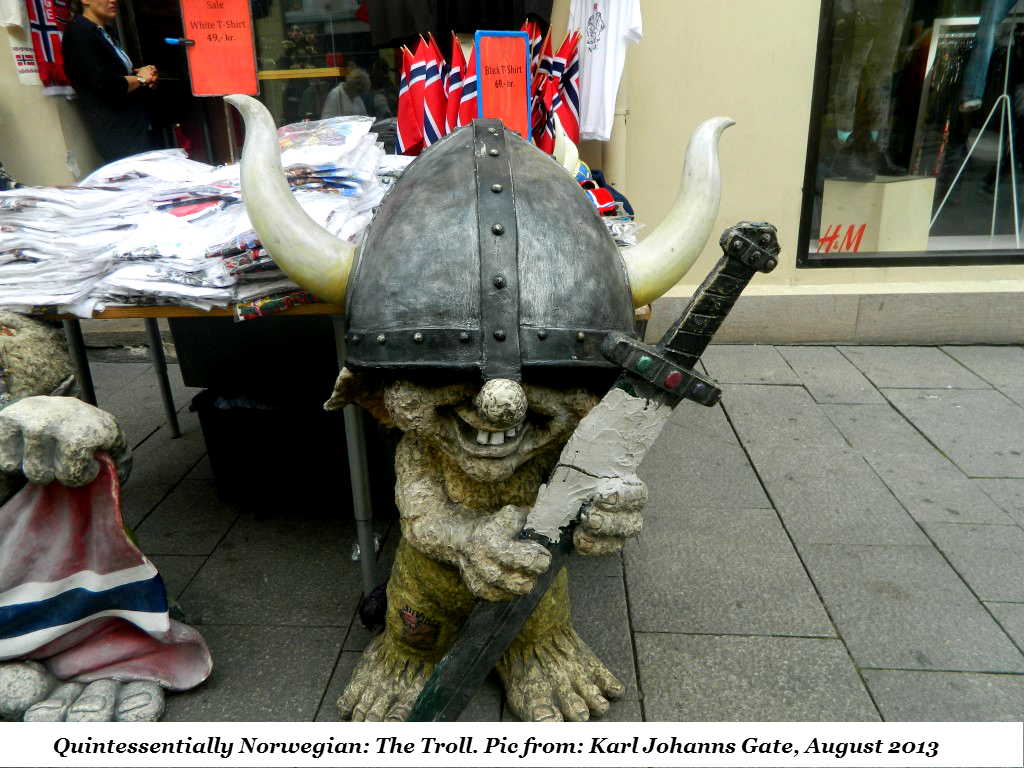 The first thing you will notice about Oslo as you arrive into the airport is the seamless transportation and the ease with which you can get around. Within moments of getting our backpacks off the belt we were in an NSB train and on our way to Oslo Central Station. It was our first port of call in Norway when we traveled there in August 2013.

Oslo Central Station is the kind of place where everything comes to a beautiful start and a melancholic end – be it travels, or be it great times spent with friends. You can see people amble around with their parents and friends and fiddling with their luggage. There are young people with sparkling eyes ready to get out of Norway and see the world and then there are the middle-aged ones who are coming home with hesitation and anxiety.

Oslo is the largest city and the capital of Norway – however unlike other large cities such as Mumbai or New York or San Francisco, Oslo does not give the vibe of a ruthless, unrelenting city. Instead it seems much more poised, and sure of itself and its denizens, in an almost self actualized way.

The best way to see a city is by walking, and Oslo with its pedestrian friendly sidewalks and traffic crossings, makes it easier. We started walking towards Storgata (Gate or gata in Norwegian means street). They say Oslo city is always “under construction” and true to its word, we found that several streets on the way were being repaired. Storgata was lined up with a few small bars where retired old men sat enjoying a beer and watching the rest go about their daily lives. It is a quiet street which comes alive every time a tram passes and passengers disembark. Anker hotel and hostel are a part of the same building complex located at the end of Storgata. We checked into Anker hotel and picked up a few maps and the tram schedule.

A quick shower later, we were in a tram and on our way to Aker Brygge. It is located along the Oslofjord and used to be a shipyard until 1982. The modern day Aker Brygge is home to several cafes and bars with varied cuisines. We had a late lunch at Olivia’s Italian restaurant accompanied by a lovely local beer called Ringnes Lager. We walked around for a while along the waterfront and saw several families with kids trying to catch the last bit of sunlight, groups of friends chatting and couples eating ice-cream to beat the arctic summer. I had already begun longing for this city.

The next morning we took a tram to the Opera House which is located at the head of the Oslofjord. It has a unique angular construction such that its roof meets the ground along a downward slope and it seems like it has almost risen out of the water. It was completed in 2008 and is made out of beautiful white marble. From the top of the Opera House we could see sprawling views of the city across the Oslofjord. We captured some pictures and took a look at the posters for all the upcoming shows.

From the Opera House we boarded a tram back to Jerbanetorget which is the tram stop for Oslo Central Station and from there on we walked around the city looking at the various shops and farmer’s markets. Walking around Oslo, early in the morning, is a beautiful experience. The city wakes up late and even breakfast cafes are closed at 9 AM. The streets are calm with an occasional biker scuttling by and there is a mix of smells – the early morning mist in the air, wafts of bready smells from the bakeries and coffee shops and that of damp grass.

We came upon a 17th century cathedral called Oslo Domkirke which was surrounded by little gardens and flowers were in bloom all around. We walked inside to see beautiful brass chandeliers and sunlight filtering through colorful stained glass panes. It was our first experience in a European Church and we would see more as we headed to Flåm. Neha lit a candle and made a wish while I walked around taking pictures.

As we made our way around Youngstorget square, we saw the city slowly coming to life – we sat at a bus station and saw the people beginning to amble around with their daily routines. Shops opening at their pre-defined times, young boys delivering flowers on bicycles, older men and women taking a leisurely walk, several middle-aged ladies walking their dogs and buying fruits and vegetables from the farmer’s market. It is beautiful to see a city wake up. You feel like you are a part of the city, as if you’ve always lived here and these walls and these streets have always been your friends. A few more minutes here and we would have started confiding in the city, our deepest secrets.

We had breakfast and coffee at Politikken Cafe which was located just across the Youngstorget Square. It reminded us a lot of Granada (Nicaragua) – with its Spanish architecture and flowers hanging all around the place giving it a breath of fresh air! After breakfast we moved on to the most famous street in Oslo called the Karl Johan’s gate. It is a walking street with several restaurants, bars and shops dotting both sides and it leads all the way to the Royal Palace. We walked along Karl Johan’s gate through festive atmosphere. There were preparations and previews going on for the Oslo Jazz Festival. A bunch of musicians paraded through the street playing the drums. Old ladies dressed in crisp black dresses and headscarves were a part of the parade and they danced gracefully with smiles all over the place. These were a bunch of happy people enjoying their weekend the only way they know – outdoors. We walked all the way to the Royal Palace to see the change of guards that happens everyday at 1:30 PM. We were able to catch it mid-way and it was a good experience – but if you are constrained for time, it can be skipped.

Fiskeriat was a quaint little cafe outside the Folketeaterat (Folk Theatre) overlooking the Youngstorget square. We had lunch there with another round of a local beer called Hansa Pilsner. We tried the Bacalao, which is a fish in gravy preparation with potatoes and pumpernickel bread which is found nearly everywhere in Norway. We spent the afternoon sitting outside the cafe and watching the world go by.

In the evening we went to a bar called Internasjonalen which is located right next to Fiskeriat. The weather was a little cold but we sat outside serenading our beers and talking about the great times we spent in 2012. Through this trip we were trying to recreate some of the magic of that year that we spent zipping across United States, Costa Rica, Nicaragua and Peru!

This was goodbye to Oslo and one last beer before we ever come back here again. We both wondered if we ever would. Would we be the same people then as we are now? Would we remember these evenings? Would we hear our laughter tucked away in a quiet corner of this little pub? Nevertheless it was time to head back and prepare to leave for Bergen the next morning.

Best Time of the Year: mid-June to mid-August is usually the summer months and they are the best time to visit Oslo to see all it has to offer in terms of outdoor activities, walking around, mingling with the locals, etc.

If you are looking to catch the Northern Lights (Aurora Borealis), then the best time to see them is the colder months between September to March.

To avoid crowds, try to go during the waning season which is end-August or beginning or September – it might be a little cold, but completely worth it and it will save you a few hard-earned rupees.

Where to stay: Norway, in general, can be pretty expensive if you don’t plan your trip well. That being said, it is surely possible to travel to Norway on a budget. Don’t believe it if someone tells you, you shouldn’t travel to Norway just because it is expensive! We stayed at the Anker Hotel which is one of the cheaper accommodations. If you want something even cheaper, then try the Anker Hostel (located in the same complex). Get in touch with us for more information

Next ArticleTop 7 food experiences in Jordan