Our favourite diners across the United States

The United States is a conflation of many different cultures and as always, it is most evident in the food there. You could find food from authentic Japanese cuisine to spicy Venezuelan and from Danish cuisine to Moroccan cuisine. However, there is something that is quintessentially American and that is the diners there.

Only a diner can provide you with a 24-hour access to breakfast awesomeness and food that is unabashedly delicious as it is sinful. What I love most about an American diner are the booths that make me feel very hollywoodish (yes, that’s a word, starting now) and the servers, who are almost always happy and cheerful with their “what can I get for you today, love?”

Today I want to give you a peek into my favorite American diners that we have fed at, over our travels across America in the two years that we lived there. 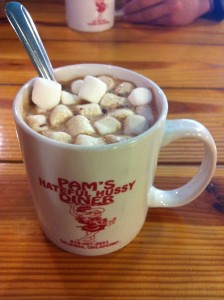 Of course you love the name. Who wouldn’t? Tucked into a small town in Oklahama called Talihina (later made famous by Kings of Leon in their autobiographical song “Talihina Sky”) this diner delivered us with the best food we had in the US. Yeah, them pretentious NYC restaurants included. Every inch on the diner wall is dotted with Anti-men slogans. Makes you wonder if the diner is owned by a woman scorned, but it was all in good humor. The servers were all women, with almost a motherly vibe to them, “Yeah, let me ask the chef to add some more marshmallows to your hot chocolate”.

This was my usual breakfast joint over weekends when I lived in Harrisburg for a little over 6 months. And, everyone who visited me was without a doubt, invited to this little diner at Harrisburg downtown. The sourdough French toast is an unusual but a very clever take on a regular French toast. I love my eggs sunny side up and a good measure of a breakfast joint is the perfection and consistency that they are provided with. At Roxy’s that was always a given. The husband used to love the Lyonnaise Omelet, made with the three ingredients he most loves in his omelets; cheese, onions and mushrooms.

Lee Vining is often known as the gateway to the Yosemite National Park. In the summer of 2012, Jay and I made a road trip on the West-Coast of the US, beginning from SF to Inyo National Park, through Yosemite, Death Valley, Las Vegas and then ending at beautiful Sedona. Lee Vining was the small town we chose for our stay one night and as every other small American town, it did not disappoint us with its choice in diners. Hash browns are the husband’s measure of a good diner and the hash browns here were the best we ever had. With friendly waiters, this diner is a classic diner from the 70s.

Red Lodge is a small town in Montana, just before the Yellowstone National park. One of America’s 100 best adventure towns as per National Geographic, Red Lodge stands at the foothills of the Beartooth mountains. We found a highly recommended place for breakfast, Café Regis. It is a sweet lovechild of an American diner and an organic grocery store. The food was freshly made and ingredients included herbs and vegetables grown in their own farm next to the café. Jay had this monstrous Huevos Rancheros that was a grilled corn tortilla with a filling of black beans, queso cheese, fried eggs and a generous portion of everything Mexican that we love; sour cream and guacamole. I had a Popeye Omelet with spinach and mushrooms. Unmistakably, everything was fresh and that made all the difference. We left there with a full tummy and a few of their hand-made preserves and pickles.

This diner, where I used to be a regular, is straight from the Hollywood movies. Shiny tiles and an unearthly road-sign complete the look. This is where I used to go to get my fill on greasy yummy fillings. My favorite was a waffle with whipped cream and fresh strawberries with some syrupy sweet sauce poured all over it, to cut through the acidity of the strawberries. I have known to have plundered through an entire Mexican wrap (Even with the humungous American portions).